Leicestershire Police officers have teamed up with a number of schools across the city to discuss the dangers of knife crime as well as the consequences of carrying a knife.

In the past week, officers have visited The Lancaster Academy and Sir Jonathan North College, both in Knighton, as well as Babington Academy in Beaumont Leys  with knife wands and knife arches where youngsters voluntarily passed through the  latter.

PCSO Paige Martin from West Leicester Neighbourhood Policing Area, was among the officers at Babington on Monday, 1 July.

She said: “We can’t ignore that knife crime is happening across the country but we aim to educate young people about the dangers of this as well as the consequences of carrying a knife. The aim of our visit was to spark open discussion and conversation with as many young people as possible.”

Among the messages officers spoke about was tougher sentencing of those caught carrying a knife as well as the fact that statistically, carrying a knife makes it more likely they will become a victim themselves.

PCSO Martin added: “We want all schools and colleges to follow Babington’s lead. One life lost, either as a victim or through a hefty prison sentence is one too many. Carrying a knife does not make anyone safer, in fact it puts them more at risk.

“Our hope is that by educating young people we can divert them to a path that is far more productive. That’s why visiting schools is among our priorities.

“We know that tackling knife crime can’t be done by us alone and that a multi-agency approach, working with educators, health officials, peer education schemes, community safety partnerships, and others is vital. We are extremely grateful that staff and students at Babington Academy gave us their time.” 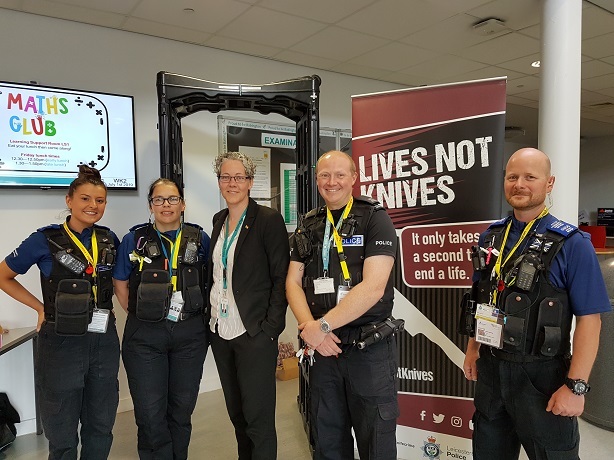 Sara Fletcher, principal of Babington Academy, said: “Knife crime is national issue and here at Babington we are keen to ensure our beautiful school community understands the dangers of knife crime and the value of working together alongside our local police officers. We want to ensure our community is always safe.”

Earlier this year education watchdog, Ofsted, published a report about safeguarding young people from knife crime. It said that “no single agency, including schools, can solve knife crime on its own.”

The report made a number of recommendations, including improved information sharing between schools and other agencies about young people, and the inclusion of safeguarding issues, including knife crime, into the curriculum.

Pupils at The Lancaster Academy have also received assemblies about the dangers of knives and will continue to receive key messages about how to stay safe in the new academic year.

Nicola Hartshorne, vice principal of The Lancaster Academy said: “It’s vital that young people know how to stay safe and are educated about the dangers around them. We know that by working together we can get these important messages through.”

Rose Angus, principal of Sir Jonathan North College added: “We were delighted to work in partnership with the police on this national priority. It is important for all young people to understand the terrible consequences of carrying knives.  Our students were fortunate to take part in a demonstration of the knife arch, an enforcement action the police use.”

Sergeant Nick Woodrow from the force’s Serious Harm Reduction Unit, added: “If we can help improve standards of behaviour and teach young people the situations that put them at greater risk of offending, we can prevent some from being drawn into knife crime. It’s great to see more schools being so proactive and I hope that we can  ensure that as many young people as possible make the right choices.”

Written by Leicestershire Police
Back to News ListPreviousNext

Back to Top
Babington Academy, Strasbourg Drive, Beaumont Leys, Leicester, LE4 0SZ
office@babington.leicester.sch.ukT: 0116 2221616
*
Cookie Notice: We use cookies on this site to improve your user experience.
Accept Find out more